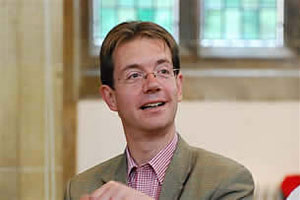 David Woodcock began his musical education as a chorister at Canterbury Cathedral under Dr Allan Wicks. He returned to Canterbury at the age of 16 and completed 2 years as Cathedral Organ Scholar before going up to Cambridge as Organ Scholar at Queens’ College. During his three years at Cambridge, he directed Queens’ College Chapel Choir, the St Margaret Society Chorus and Orchestra and the Gentleman of St John’s. In September 1992, David was appointed Organist and Choirmaster at Oakham School, where from 1995-2005, he was Director of Music. Since September 2005 David has been Director of Music at Harrow School. Harrow has an outstanding reputation for the quality of its music education, and a large number of pupils go on to university with organ and choral awards.

David has a deep commitment to fostering music education of excellence. In the last 12 months, he has overseen more than 100 concerts given by Harrow’s musicians. Recent highlights have included conducting performances of Walton Belshazzar's Feast in which nearly a quarter of the school played or sung, Mahler's Symphony No.1 and Beethoven Symphony No.3 with the School Orchestra and conducting the whole school in the Royal Albert Hall in a performance of Harrow School Songs in November 2017; an extraordinary event which performed to a capacity audience. The following month he led a concer tour with Harrow's musicians to Hong Kong, Kunming and Changsha.

He is a Fellow of The Royal College of Organists, for which he has served on the Trustee Council, as Chairman of the Academic Board and as an examiner. He has also served as a member of several national Music Education committees. Life as a school master leaves little time for other things, but David still finds time to perform as an organist and a singer. He sings occasionally with the Tallis Scholars and the Choir of the English Concert. As an organist he has given many recitals throughout the UK, including St Giles’ Cathedral Edinburgh, King’s College Cambridge, Coventry Cathedral, York Minster, Westminster Abbey and Canterbury Cathedral. In addition to family life and working his other great passions are following Arsenal FC and Kent CCC.