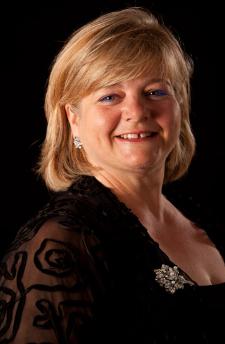 Since graduating from the Guildhall School of Music and Drama, Janet has worked professionally as both a solo artist and consort singer. Whilst specializing in early music and performing with many of the UK’s leading ensembles, her versatility has led to her performing and enjoying all genres from Tallis and Purcell to Verdi and Puccini, backing on pop CDs, Jazz and Disney soundtracks, as well as enjoying an end-of-course Karaoke session!

Janet has long worked closely with Norfolk-based composer Patrick Hawes. Their first album, Blue in Blue, featured Janet’s “voice like melting honey on freshly buttered toast” (Radio 3) with The English Chamber Orchestra. Released to considerable critical acclaim, the album became the highest ever entry in the UK’s Classic FM “Hall of Fame” and continues to be regularly featured in their programming. Janet also premiered Patrick’s The Call, written for her, in Lincoln Cathedral with The English Chamber Orchestra. Her work with Patrick has launched her into the world of media music and her “bell-like tones” (Financial Times) can be heard regularly on TV, radio and films as well as on numerous classical and pop CDs. Janet was thrilled to premiere Patrick’s Song of Songs with her own choir, the Cecilia Consort two years ago.

Having sung with The Tallis Scholars for 23 years, Janet left the group in November 2013 after a wonderfully fulfilling career with them, touring around Australia, Japan, the United States and Europe.

As well as fulfilling her solo and recording engagements and performing with artists such as Morgan Szymanski, Janet enjoys adjudicating choir competitions and festivals as well as leading singing master classes and choral workshops for all ages, with more planned this year. Janet is very enthusiastic about working with amateur singers and has had a long and happy association with both The Cecilia Consort (Director) and Newbury Choral Society as their assistant Musical Director. From September she takes up her appointment as Head of Choral at Cheam School, where she currently has an ever growing family of pupils.